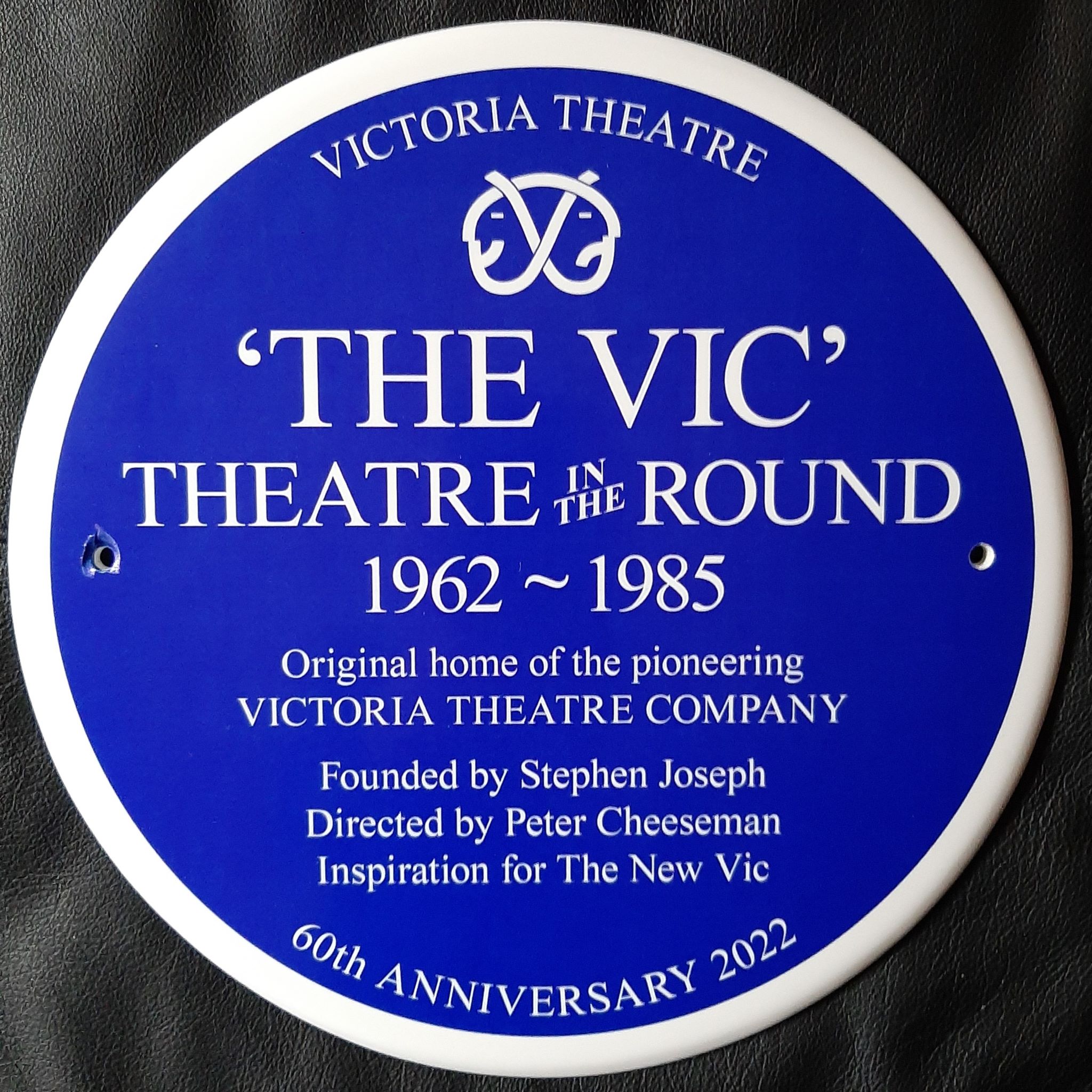 Dedication to the VTA volunteers

This guide is dedicated to the many volunteers who have contributed their time and skills to the Victoria Theatre Archive over the past 20 years. With their dedicated assistance, the archive contents have been made more accessible to the public, providing a valuable resource for research into many aspects of theatre production and local social history.

A special dedication is made in memory of two outstanding volunteers, the late Keith Plant and the late Michael Turner.  They brought with them great enthusiasm and a wealth of knowledge about the Vic.  They generously devoted many hours over several years to the development of the archive and in so doing became valued friends of the volunteer team.

Staffordshire University Special Collections is proud to be the current home of the Victoria Theatre Archive. This is an unrivalled collection of posters, photos, programmes and other resources charting the early history of the theatre.

Created in 2022, the Theatre's Diamond Jubilee year, this online collection of artefacts aims to give a glimpse of the wide variety of materials and resources contained in the Archive. In doing so it attempts to highlight some of the aspects of drama and theatre for which the Vic, and now the New Vic, is renowned.

You can visit the collection by arrangement. Please contact academicskills@staffs.ac.uk

The Victoria Theatre Archive logo shown above is based on the original 1960s Vic Theatre logo created by artist and designer Bob Brooks.

More information about the collection

The Victoria Theatre Archive (VTA) is a comprehensive collection dating from 1962 that documents the history, policies and practice of the Victoria Theatre, its development of documentary theatre, performance in-the-round and community involvement. As a research resource, academics from universities across the country have acknowledged the VTA’s value and significance and a collection of academic studies covering various aspects of the theatre’s work is held in the archive.

The Victoria Theatre Archive has been in development since 2002 under the guidance of an Honorary Curator working with a group of dedicated volunteers. Electronic indexes, tables and data bases have been created, together with a collection of scanned images which have been used in academic research, public exhibitions, and Heritage Day performances, as well as by the New Vic Theatre’s marketing, design, and outreach departments.

Using resources from the VTA, a major exhibition at the New Vic Theatre in 2016 celebrated the theatre’s 30th anniversary.  In 2022, two public exhibitions celebrated the anniversary of 60 Years of Theatre Making at the old and New Vic theatres.  The exhibition materials for these events are stored in the archive for future reference and research.

"The Archive covers 394 productions during the 36 years. Plays range from Shakespeare, Sheridan, Shaw, Wilde and other classics to modern and very contemporary writers such as Peter Shaffer, Joe Orton, John Godber, Peter Terson, Alan Plater, and especially Alan Ayckbourn who was both an actor and director at the Victoria Theatre, premiering two of his plays there in the early 1960s. (Since then, Ayckbourn’s plays have almost all been written to be performed in the round, though sometimes they are not produced in that format).

In addition to plays, Cheeseman established a tradition of regular one-off evenings of concerts, ranging from classical and jazz, to folk and popular music. The Lindsay String Quartet, specialising in music in the round, being a regular favourite, from the time the quartet was in residence as the Leverhulme Scholars at Keele University nearby in 1967, until the late 1990s. Other events have included poetry readings, homages to local heroes such as Arnold Bennett, Josiah Wedgwood, and Stanley Matthews.  Finally, the records exist of the award winning ‘Borderlines’ outreach and community wing, and its predecessor activities which have been a characteristic of the theatre from the beginning.

The oeuvres, the documentation and the ephemera of the Victoria Theatre are immense. The records of the activities and the personalities involved over the years ranging from actors, playwrights, directors, designers and original approaches to production and their influence is prodigious. One characteristic which nevertheless shines out is the strong community thread and the originality of the approach to creating and directing.  Despite this ‘local’ aspect, the issues dealt with in a core of plays have emerged to have universal significance especially in countries with a declining industrial base. "

The VTA also holds full records of the planning, fundraising, and building of the New Vic Theatre in the 1980s, including its early history and local community involvement. To build the New Vic, a fundraising appeal was launched in 1983 with a target of £3.2 million.  Adding to grants from the Arts Council, charitable foundations and trusts, the Appeal was supported by local people and businesses who raised over a million pounds towards the costs.  A community of Vic Appeal volunteers took on the challenge of organising fundraising events, which continued after the New Vic opened in 1986, and into the 1990s. The VTA fully documents this fundraising journey and its achievement.

The period covered by the Collection dates from October 1962, when the old Victoria Theatre opened in Hartshill, Stoke-on-Trent, to January 1998 when the first theatre director of the old and now New Victoria Theatre in Newcastle-under-Lyme, Peter Cheeseman, retired. The number of full-scale productions in this period total was 394. These productions generally played for three or four weeks in repertoire, but several productions each year were presented in straight runs of four, five or more weeks or in combined straight runs and single weeks, such as the annual children’s Christmas play or a large-cast play needing guest actors to join the company.

In addition – and yet to be counted – are many one-night performances by the company, and concerts by visiting classical, jazz and folk musicians. Principal among these being the Lindsay String Quartet, who presented up to five recitals a year.

A busy programme of educational events for local school children and students, together with talks to local and regional organisations was undertaken from the beginning by the company and staff.  In the New Vic, with its mature wooded grounds, the subject matter of these events was expanded to cover nature conservation.

Photographs:  all productions – press and display prints; selected productions - coloured and monochrome slides;  negatives – incomplete but substantial coverage. Also photographs of some rehearsals, of theatre staff and companies, special events, research for the documentaries, fundraising for New Vic, the building and the grounds

Audio/visual media:    several 16mm films (broadcast copies), VHS copies of performances and events, including the building of the new theatre, show recordings of productions at the New Vic (approximately 100 titles) plus outtakes

Correspondence:    Entire collection of correspondence files covering all of the theatre’s activities over full period 1962-1998 (2000+ files, each full of letters and replies)

Card indexes:    several card indexes are in the collection covering separate topics such as playwrights, publicity contacts, casting lists, actors in the company etc. plus one major index of all productions with details of the records relating to each one i.e. prompt copy, whether recorded, availability of lending copy etc.

Administration and Finance:    accounts of income and expenditure, budgets, advance financial planning, applications for funding from Arts Councils and local authorities, records of audience levels, details of fundraising schemes especially the New Vic Appeal, catering and bar income and expenditure, programme planning – yet to be calculated

Artwork and design:    a small collection of sketches, designs and framed pictures by designers and other artists, including a special collection of approximately 100 character and set designs by the painter, playwright, poet and storyteller, Arthur Berry

How this guide was created

During 2022 this guide to the Victoria Theatre Archive was created under the supervision of Romy Cheeseman, Honorary Archivist and Civic Fellow at Staffordshire University. Inspired by the Vic Theatre's collective approach, this guide is the product of work done by many individuals from both the Library and Learning Services team and the Victoria Theatre Archive volunteer team.